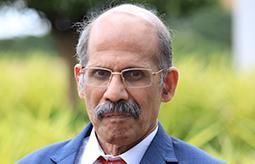 Dr. A. S. Hegde is a once in a generation neurosurgeon, replete with immense knowledge, un-paralleled surgical skills coupled with a never-ending sense of service to his fellow man. From clipping complex aneurysms under circulatory arrest to complete excision of deep-seated skull base tumours, his record in the field over 44 years is impeccable. He has individually performed over 17000 neurosurgical procedures and has one of the highest series of aneurysm surgeries in the country.

On completion of MBBS at St. John’s Medical College, Bangalore, he did his neurosurgical training at NIMHANS, Bangalore, and later rose to the post of Consultant. Having a special interest in neurovascular surgery, he pursued a Ph.D. in microvascular neurosurgery at Shinshu University Japan, under world renown neurosurgeon Dr. Kenichiro Sugita.

Dr. Hegde is well known nationally and internationally, not just as a neurosurgeon but also as an institution builder of proven administrative acumen. He has established and served as director of the Neurosciences Institutes at Manipal Hospital, Old Airport Road, Sri Sathya Sai Institute of Higher Medical Sciences, Whitefield Bangalore and the Ramaiah Institute of Neurosciences. Many neurosurgeons in the country have trained under him.

As a scholar in both clinical and basic research, he has been involved in various nationally and internationally funded studies partnering with the ICMR and IISc, amongst others. With over 180 publications to his name, he has been a prolific writer in his field and served as orator at over 100 conferences. With a wide range of interest extending from clinical research to medical economics, telemedicine and hospital planning, Dr. Hegde has registered patents in the United States, Europe and India.